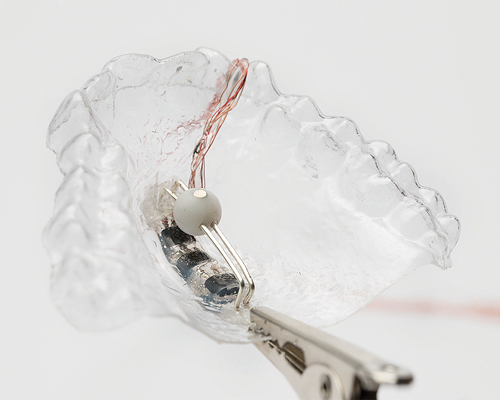 TONG is an intra-oral wearable, that allows a tongue-based interaction between human and machine. As part of her master thesis I followed an explorative and tangible design approach to explore the possibility of a tongue driven haptic Interface.

The device is located at the inside of the user’s mouth and therefore challenges the user to focus on her sense of touch while giving an input. The WiFi module behind her ear transfers the given input to other connected devices, such as IoT objects, computers or game consoles. The input is generated by moving the magnetic element back and forward, which triggers the implemen. This movement is picked up by the implemented reed sensors.

At the beginning of the project, I looked at the status quo of haptic interfaces and how human interact through touch with objects. As many interfaces address the human hand or fingertip, she decided to focused on another body part and decided to use the human mouth as an interface area.

Therefore, during her concept and ideation phase, she build many prototypes to explore and gain knowledge about possible tongue-based interaction types. Driven by curiosity and the desire to find novel principles for a tongue computer interface I build different prototypes, to explore and answer questions such as: Will the tongue detect and sense an air-pressure coming out of the device? By working with different materials, actuators and sensors I build different prototypes to physically explore my concepts.

Working with pneumatic actuators for example was one promising finding from these first prototypes. However, implementing an air-pressure-based feedback into the final TONG protoype was a too complex manufacturing task for the given period of research and accessible equipment. 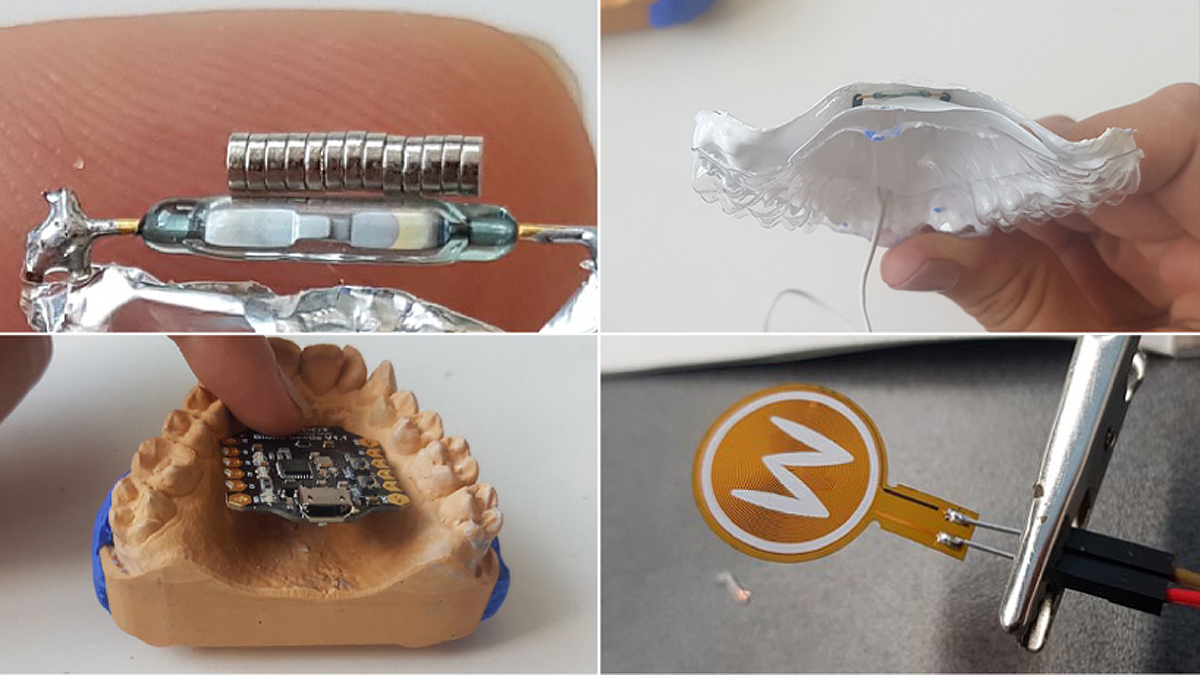 Final Prototype
The final prototype is based on an electro-magnetic principle to ensure a tangible, fluent and reliable Interaction. The embedded reed sensors detect the location of the magnetic sphere-element, which the user’s tongue can push back and forward. To design a fluent and direct correlating manipulation of the ingame paddle, the location and distance between the sensors had to be adjusted to the user’s specific tongue-requirements. The device therefore was designed with an alternated retainer architecture at the palate area for implementing the sensors. They were bonded in position with silicone to ensure non-permanent positioning and additional sanitary reasons. 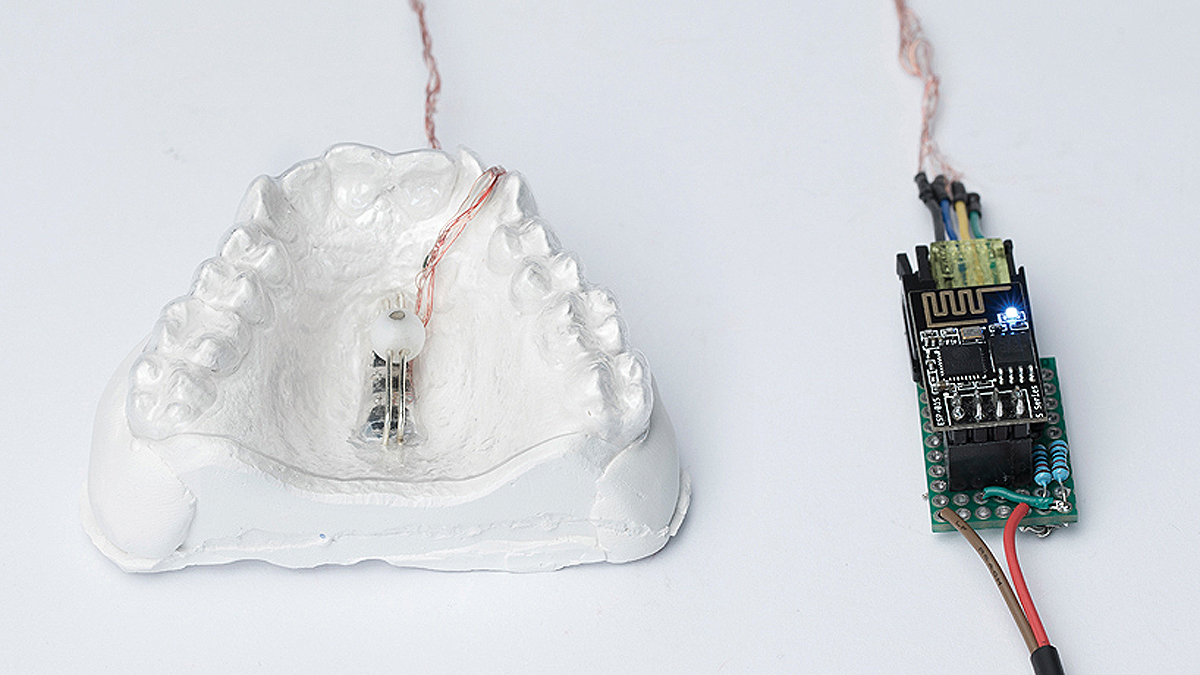 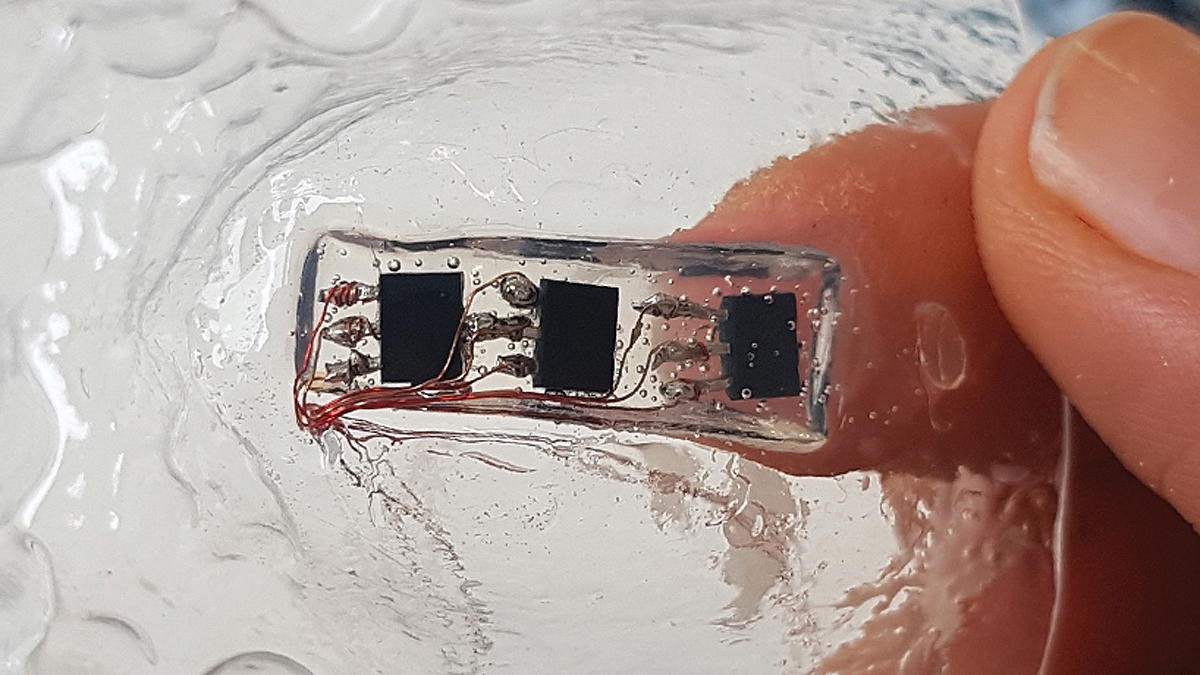 For experiencing and testing the final prototype, a game play situation was created. After building a working prototype for  her supervisor Prof. Dr. Lasse Scherffig and myself, I set up the game Tong. Noticeably it is based on one of the most iconic arcade games in history and requires the user to give a tongue based Input instead of using his hands. 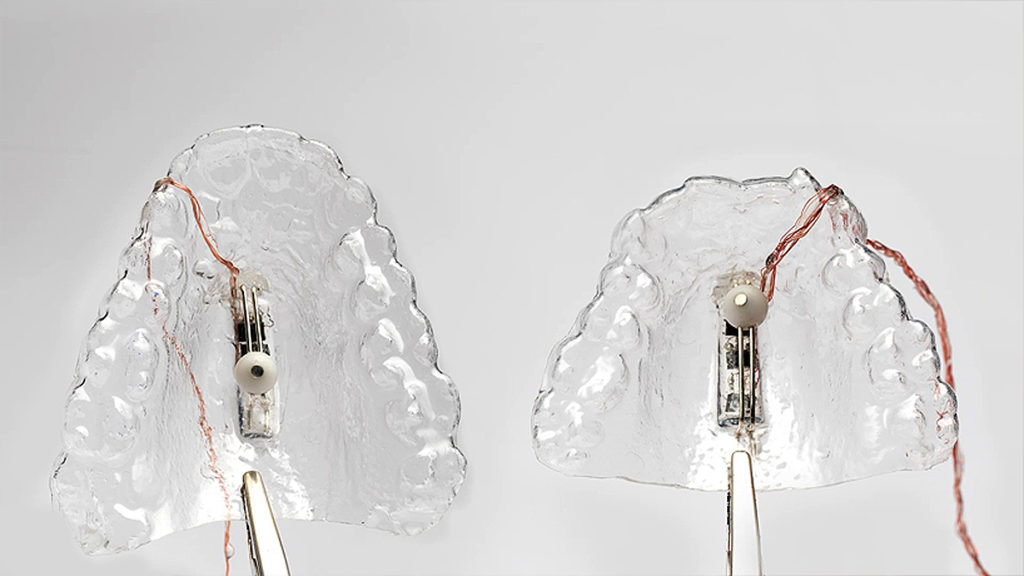 For exploring the game play two individual devices were manufactured. Their design had to be adjusted to each of the user’s physiological attributes, such as a comfortable and reachable position for the sensors at the palate. Finding the best distance between the two sensors was another important interaction aspect, as the needed tongue pressure and time to trigger the different sensor should feel fluent, responsive and corresponding to the movement of the ingame paddle movement. 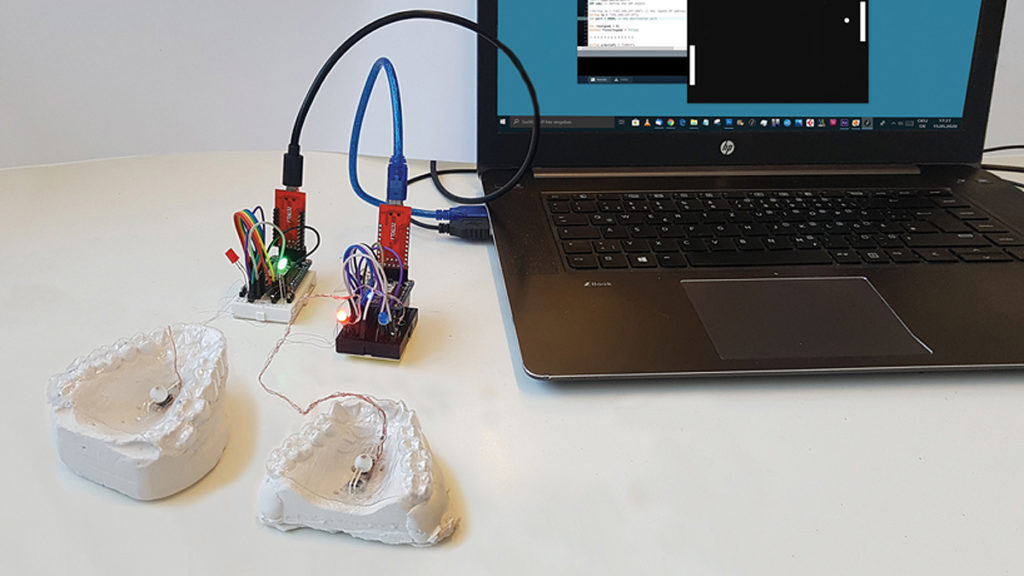 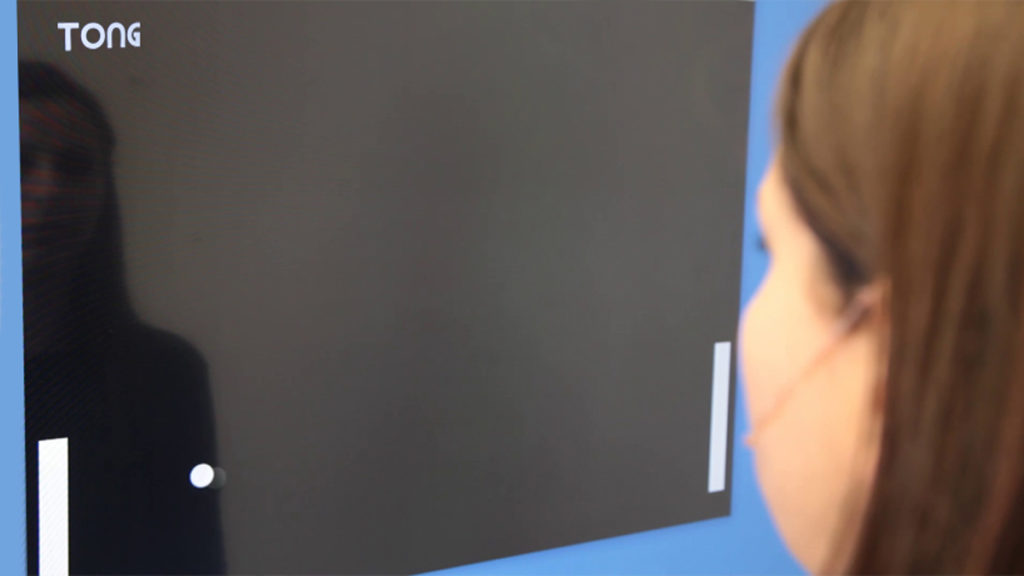 Playing tong required the user to develop a certain tongue-eye coordination. While the first game play was a bit bumpy, the user quickly improved their skills and enjoyed the game play. As well as people, who would observe the game play situation where wondering, how the input was given and were amazed by the unusual, playful and a bit mysterious form of interaction.

Thinking about possible applications and finding suitable user scenarios was another important part of this work. Reducing the size of the device or even redesigning the design of it, implementing the wifi module and battery into the retainer and embedding an actuator to enable a haptic feedback by the device would be the next steps. As well as partnering up with other disciplines to test the device on a more focused target group. 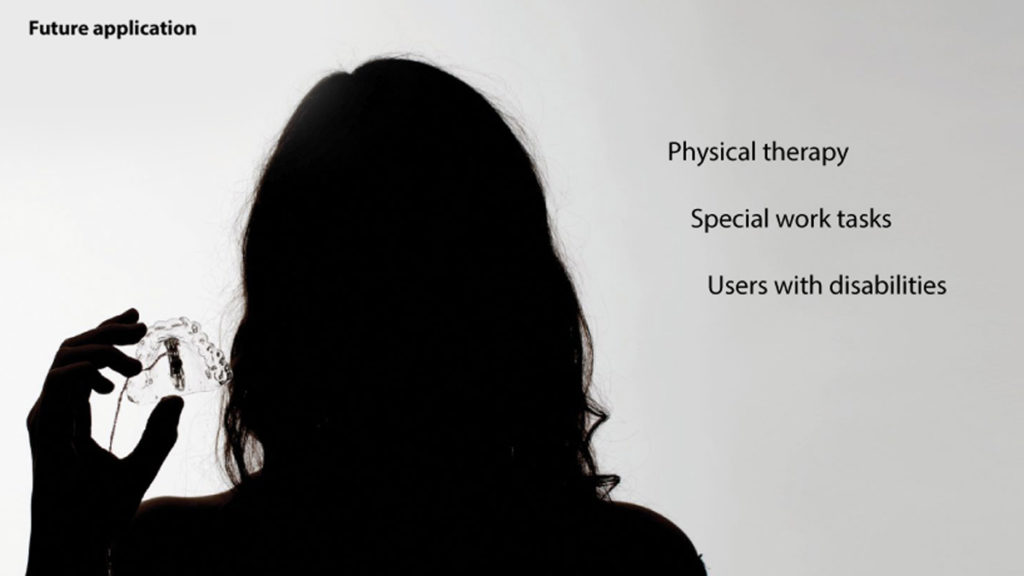 For future applications TONG could be used in physio therapy to playfully motivate patients to re-train their tongue movement. It might as well be used during specific task forces, where the users eyes, feet and handy are already occupied by other performance tasks: An astronaut might use a tongue device during an extraterrestrial mission to give a filigran input, because the bulky design of astronaut suits and gloves are not design for such delicate interaction tasks. A pianist might flip his digital note sheets with his tongue while playing or an skier could remote his music player or smartphone with his tongue while skiing.

And of course the most promising application area lies in the area of inclusion and universal product design: Thinking about common or commercial interfaces, the majority is designed for a hand or finger driven Interaction. And thereby excluding user’s with a lack of fine motor skills in their hands or fingers to engage with those devices. TONG could therefore enable a paraplegic user to interact and connect with their digital environment through their tongue as an alternative.

As this works demonstrated the potential and social importance of developing an intra-oral device, I will continue working on this project. If you are interested in a cooperation or have any questions, feel free to get in touch.